For eight Sundays from February 12 to April 2 this year, migrant women and allies have been learning how to direct and produce their own videos. This is part of the Visualizing the Voices of Migrant Women Workers project, a collaboration between Dr Julie Ham in HKU Sociology and Dr Vivian Wenli Lin of Voices of Women Media. In video-making workshops, participants have been learning about the whole process of making videos including storyboarding, forming crews, shooting, editing and finally screening.

I joined four exciting video shoots on March 12, the fourth workshop. On that day, we had four separate shoots for Vicky, Ruth, Naty and Lily. All of them have been working as domestic helpers in Hong Kong for several years. 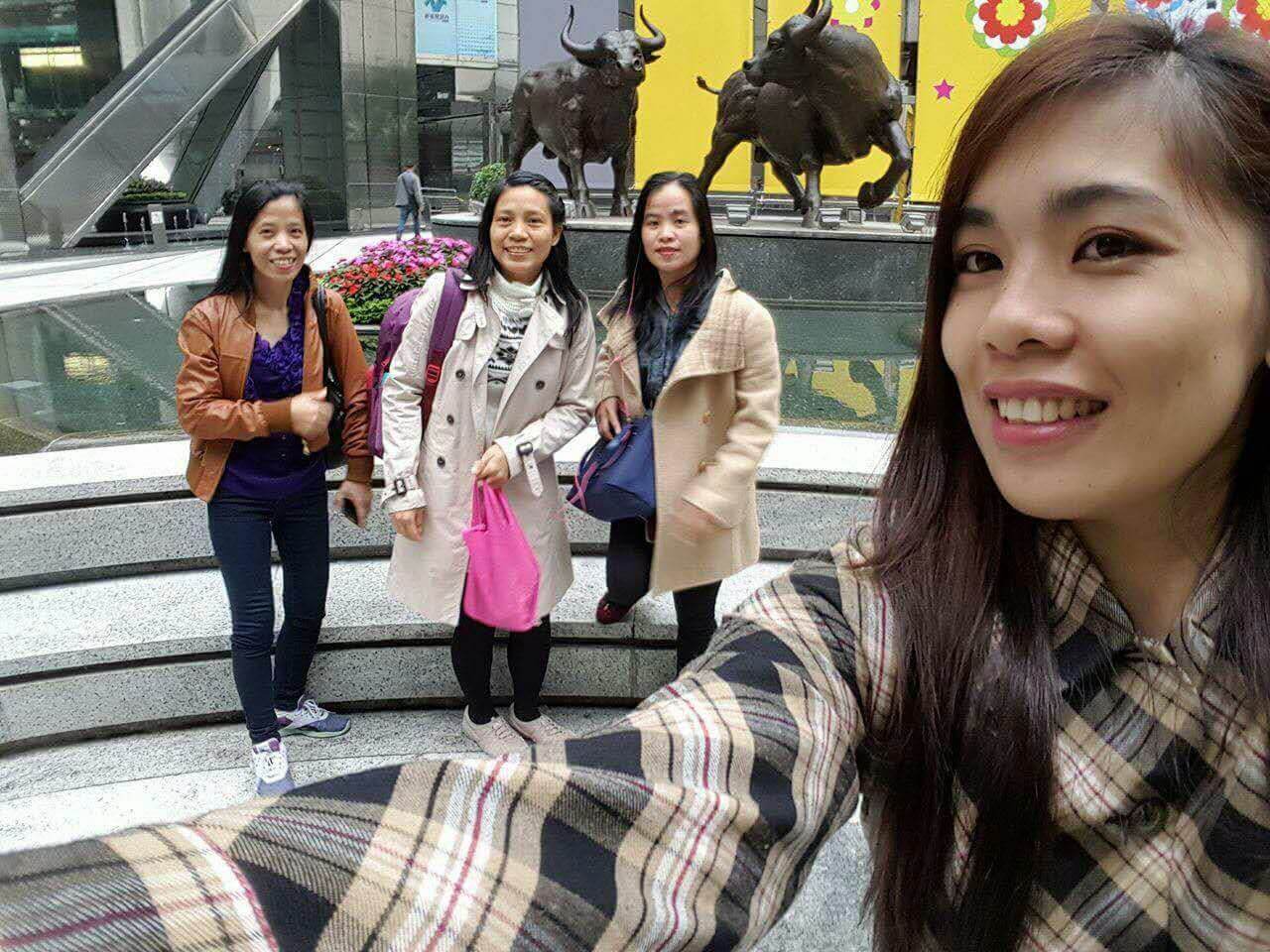 First, we shot Ruth’s video titled Wish You a Happy Sunday! In this video, she wanted to film how she spends a beautiful Sunday which is her day off. Ruth wanted to show her family how relaxing her day off is.

Ruth is 36 old. She is married and has been blessed with three children back home. Ruth told me she has been working away from her family over eight years and said: “Most of the time we missed our loved ones because we are far away from them. Not to mention the long hours of work just to meet the demands of our employers and in the long run we end up feeling stress, tired and bored. That’s why I made this video to tell how I am coping with the dilemma of having to work away from home”. 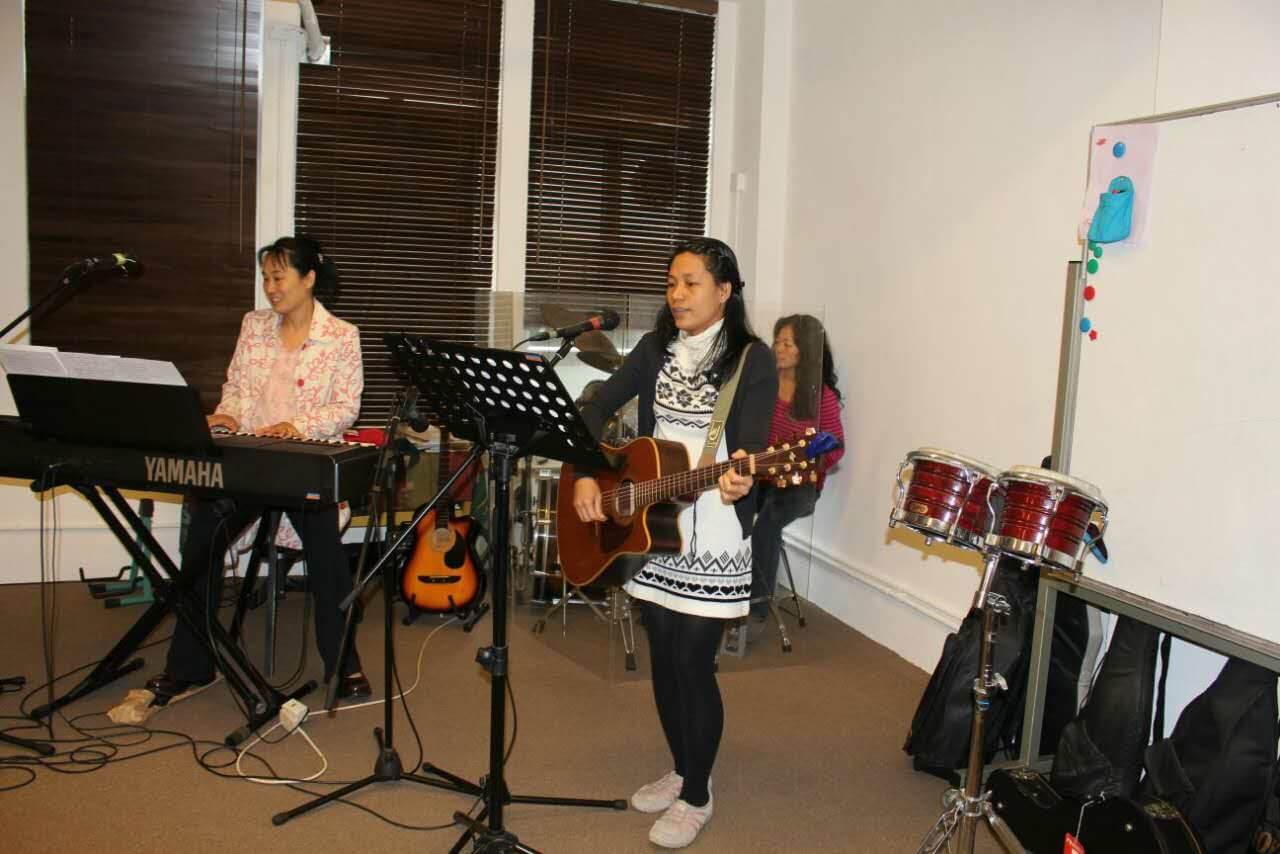 Vicky’s shoot for her video, The Song of My Heart, happened in a church with special thanks to the Island City Church. Vicky wanted to shoot her singing and playing a guitar with her friends joining later. Vicky has strong connections with the church because she grew up in the church and used to play songs for prayers every Sunday. When Vicky started playing guitar, her fluent melody impressed me a lot. Vicky found her place and peace inside her heart through her guitar, which encouraged her anytime. She also impressed me as a strong person who used her commitment to inspire others.

Later we added the audience and band members into the shot. I was deeply moved by the sincerity and humbleness behind their voices. They used songs to deliver their deep love and strong belief. Even though they were not shooting for their own video, they were still 100% enthusiastic and energetic. They sang and sang until we got the most perfect one.

After Ruth and Vicky, we went to Stanley Ho Pool on campus. We made great effort to find an available pool for Naty and Lily’s video shoots. After finding, checking, and confirming with the administrative office, we finally got permission from Stanley Ho Pool. For their videos, Naty and Lily changed into their swimming suits and were courageous enough to jump into the water – less than 20 degrees Celsius that day. 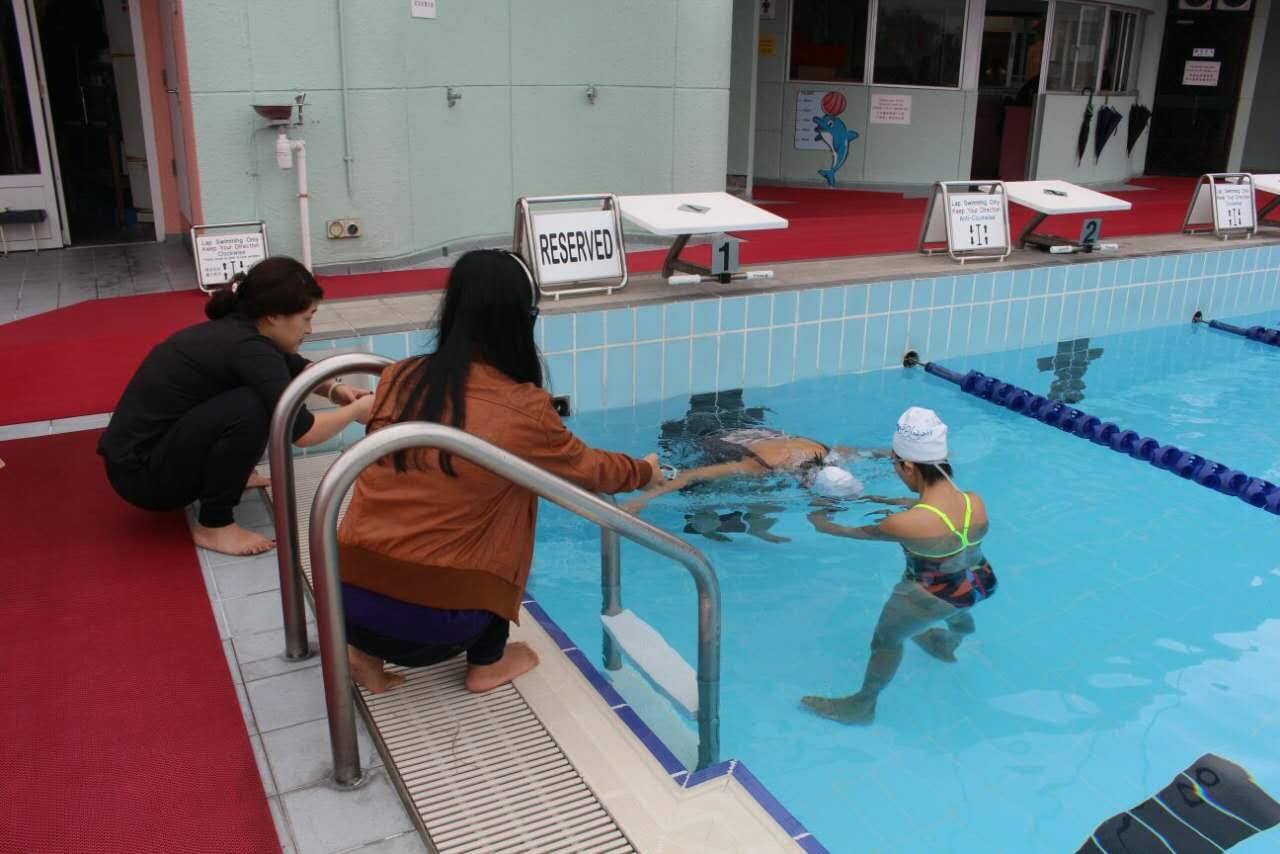 Naty’s video is titled Fixing Homesickness. Her intention is to show that she loves swimming which helps her relieve from stress. Naty once came to Hong Kong working as a domestic helper and came back home to get married. Later she went back to Hong Kong again to earn money to support her family. Naty had three kids in six years and she misses her family badly. She joined a swimming course called Splash to relieve her stress from homesickness and work.

Lily’s video, Sink or Swim, also deals with stress. In her video, she tries to deal with the news that her husband is in the hospital, her children need tuition fees and her sister needs financial support. Lily chooses swimming to let her stress flow away. She told me about her husband, children and siblings. She told me life is not easy and how she works hard to support her family. That touched me a lot. Most of the time we see smiling faces while inside their heart, there are different stories. They must be strong enough to deal with any problems and keep their worries from their families. 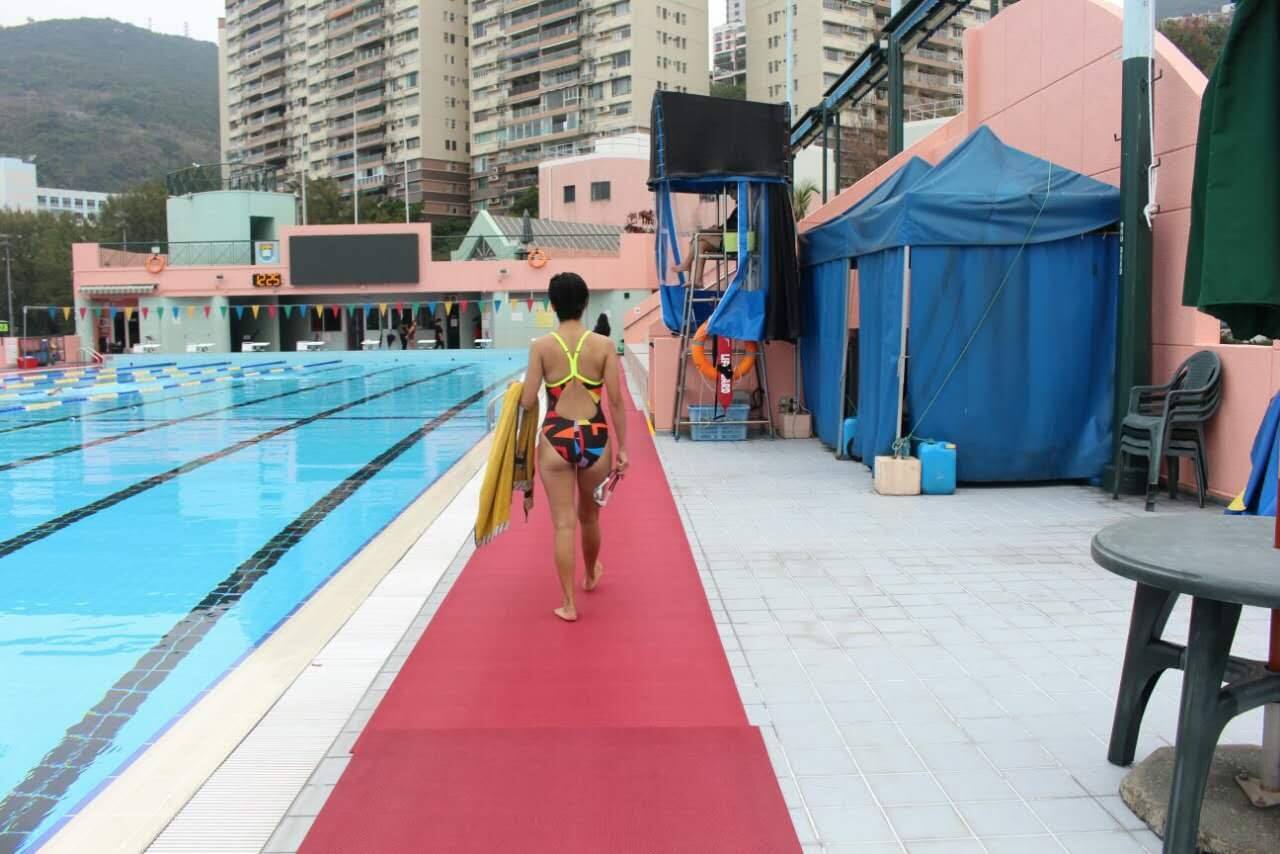 We took several takes to get the right one. Each time they jumped into the pool, Naty and Lily always did better without complaining. 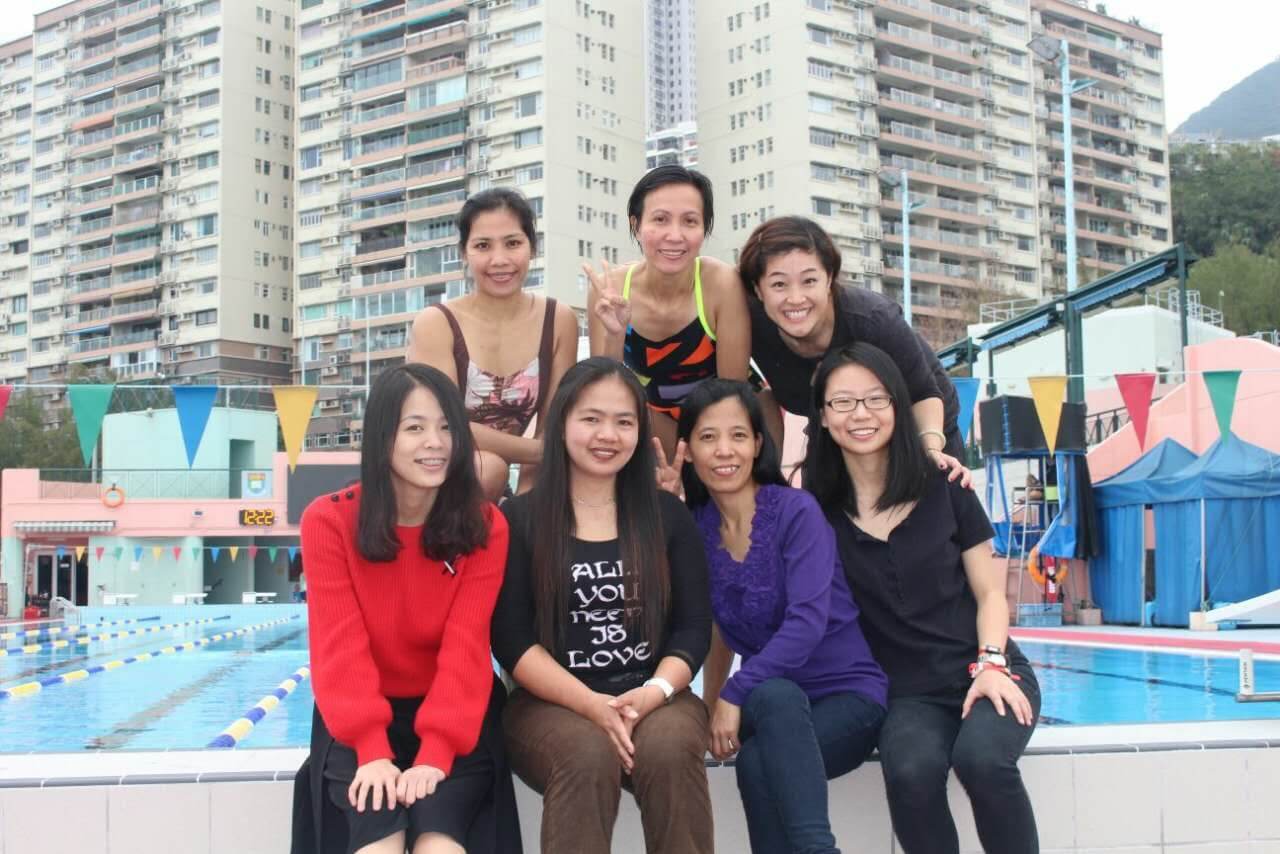 You may think shooting a video is easy. However, every step needs to be scheduled and double-checked. Our video workshops are flexible in rotating roles such as director, camera, sound, gaffer, and talent, which means that people may not know each other before they work together on each other’s crews. However, they treated each other’s ideas preciously and devoted 100% attention to make everyone’s ideas come true.

To make a special and meaningful video, participants need to reflect on their own lives, dig deep inside their hearts and be courageous enough to share their ideas with each other. It takes time to build trust and friendship to make that happen. I think one of the most important learnings in this workshop is that they could accommodate their feelings including sadness, frustration, and happiness as well as find a way to visualize their feelings and stories for themselves and their families.

Visualizing the Voices of Migrant Women Workers is a collaboration between Dr Vivian Wenli Lin of Voices of Women Media, and Dr Julie Ham in HKU Sociology. HKU undergraduates can learn more about issues like these in our Globalisation and Migration Common Core course, currently taught by Dr Julie Ham.